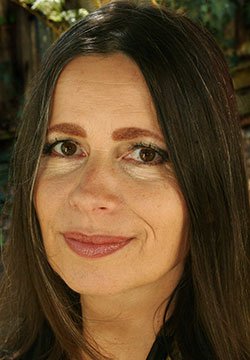 Isabella Price was born in Zurich, Switzerland, where she grew up and graduated in 1991 from the University of Zurich with an MA in the humanities (global history and comparative religion). During her six years of studies and beyond, she worked as a freelance journalist writing cultural essays on her numerous travels to Egypt, Greece, Turkey, Israel, Indonesia, Japan, India, Vietnam, Cambodia, Italy, Russia, France, Spain, Great Britain, Hungary, Mexico, and the United States. After completing her studies, Isabella conducted workshops and taught classes on global history and comparative religion at various institutions for higher education in Zurich.

In early 2001, Isabella moved into the unknowns of a new life in California. Cutting most of her ties to her previous life in Switzerland led to a great opening and presented interesting new opportunities. In 2002, she was assigned a position as lecturer on the “world cultures” at the California College of the Arts in Oakland/San Francisco. The experience of teaching at CCA led her on the path of exploring the world’s wisdom traditions even more extensively.

In-depth studies at Buddha Gate Monastery in Lafayette, California, in 2002/2003 under the guidance of a most gifted and dedicated teacher, Shifu Jian Hu, led to new insights and opened the door to a deeper understanding of the essential spiritual truths. Isabella credits Shifu Jian Hu with shaping her sense of the inner unity of all religions by inviting her to examine the scriptures of Christian gnosticism and the Christian comtemplative tradition in the context of Buddha’s teachings. The study and practice of Chinese Zen was followed by an extensive journey to some of the most sacred sites in India in late 2003. These experiences culminated in an encounter with Ammachi, also known as Sri Mata Amritanandamayi Devi, at her ashram in San Ramon, California, in 2004 that led to a profound inner transformation. Ammachi’s core teachings reflect the non-dual essence of the Vedantic tradition, which maintains that there is only one Supreme Truth shining through all religions. The encounter with Ammachi inspired Isabella to intensify her own spiritual quest and made her more attuned to the “Feminine Face” of the Divine and its myriad of manifestations across cultures. Since 2011, Isabella has been teaching Ammachi’s Integrated Amrita Meditation Technique (IAM) to veterans suffering from PTSD and other community members. Isabella is also a certified SQ21 Spiritual Intelligence consultant.

Over the years, Isabella has participated in numerous celebrations and rituals from many wisdom traditions. She has also sought out other teachers, among them Rabbi Michael Lerner (founder of Tikkun), Tibetan Buddhist teacher Anam Thubten (Dharmata Foundation), renowned scholar of religion Huston Smith, Sufi teacher Llewellyn Vaughan-Lee as well as teachers in the field of cutting-edge spirituality such as evolutionary philosopher Ken Wilber and German mystic Thomas Huebl.

In 2004, Isabella created a new course for the CCA curriculum, “Religion, Symbols, Myths – a Cross-Cultural Comparative Journey,” which received a very positive response from the art community. Since then, she has been expanding into adult education as well, offering classes and workshops at John F. Kennedy University, Holy Names University (Sophia Center), Emeritus College (Diablo Valley College), and San Francisco State University (Osher Institute), among others. Since 2016 she has been teaching the “World Spirituality” course at JFK University in the Consciousness and Transformative Studies program.

Isabella’s presentations have helped thousands of class and workshop participants to gain a deeper understanding and appreciation of other cultures and religious traditions. The positive feedback she received over the years has motivated her to write her first book series One Truth, Many Paths on unitive spirituality. She has dedicated more than 7 years of her life toward this book project because she believes that what unites us in our basic humanness is infinitely greater than what divides us. And the same is true for religions. Isabella is passionate about fostering a deeper understanding within multicultural communities, organizations, and the culturally diverse workplace.

One of the preeminent scholars of women’s spirituality today, Isabella Price is a professor of Spirituality and Comparative Religion at John F. Kennedy University in the San Francisco Bay Area, and has taught at many other educational institutions, including the California College of the Arts. Price is the author of the “One Truth, Many Paths” book series on the world’s wisdom traditions, which includes Goddess Power, Jesus Christ: The Love and Wisdom of a First-Century Mystic and In the Beginning: Creation Myths Across Cultures. She holds an MA in the humanities from the University of Zurich, Switzerland. A certified SQ21 Spiritual Intelligence coach, Price also teaches meditation to veterans suffering from PTSD and other community members. For more information, please visit her website at: www.onetruth-manypaths.com

Sign Up for News from Isabella
For Email Newsletters you can trust.

For my Summit friends, please find your free meditation here.